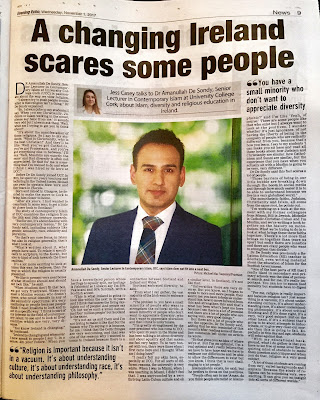 “I always try to push people to consider is that religion isn’t a thing,” Dr De Sondy explained.

“So, I always joke to my students; I say ‘When you see Christianity, Judaism or Islam walking in the street, please say hello from me.’ It sounds very odd but I always ask them ‘Well, what am I trying to get you to think about?’

“It’s about the manifestation of those religions. So I say to my students: ‘What is Christianity, who is the best Christian?’ And they’ll be like ‘Well you’ve got Catholics, you’ve got Protestants, and you’ve got everything else in between.’ I’ll say ‘Well, Muslims are exactly the same’ and that diversity is often not appreciated. So that for me is something that I’m trained to do and what I think I was hired to do here at UCC.”

Before Dr De Sondy joined UCC in 2015, he spent six years teaching and lecturing in the United States. He had one year in upstate New York and five years in Florida.

Born and raised in Glasgow, he decided to make the move to Cork to bring him closer to home.

“After six years, I just wanted to come back in some way; to get a little bit closer back to Scotland.”

The study of contemporary Islam at UCC examines the religion from the 18th and 19th century onwards.

“But for me, it’s about dealing with very contemporary issues,” Dr De Sondy said, including subjects like gender, sexuality, race, ethnicity and pluralism.

“So that’s my core focus, in Islam but also in religion generally, that’s what I look at.

“What’s written about it, what people have said. To relate it specifically to scripture, to the Koran, but also to kind of look towards the lived realities.”

It’s a lot more exciting to look at Islam this way, he believes, than the way in which the religion is usually presented.

“We like to present very neat boxes of what Muslims should and should not look like,” he said.
“When Muslims don’t fit that box, we get very frustrated. When you meet a Muslim woman who doesn’t cover, who could identify in any of the sexuality spectrums, it’s very confusing to people because people think ‘I need Muslims to look and to act in a specific way.’ I think is part of my interest in the field of contemporary Islam: to see and to look at lived realities which are very, very diverse.”

“You know Ireland is changing,” he continued.

“Ireland is changing and whenever I now speak to people I say ‘I, in a sense, am your future.’ When you have a brown-faced person whose heritage is equally split, my heritage is Pakistani so I always say I’m 50% Pakistani and 50% Scottish, with a Scottish accent.

“This is what Ireland is going to look like within the next 10, 20 years and I think that scares the living daylights out of people! And people say ‘Oh but we’re such a small nation, just four million people’ but Scotland is the same.

“It’s not an us and them and I’m not trying to make it like that but the reason why I’m saying it is because, for me, I think that the Celtic fringes are very welcoming, and that was one of the reasons why I wanted to come to Ireland because there is a connection between Scotland and Ireland and Wales.”

“From what I can gather, the vast majority of the Irish want to embrace it too.

“I’m greatly strengthened by the new president who has come to UCC who spent 30 years in the States and has been talking a lot about diversity and about equality and that makes me feel very happy. To be very honest with you, there were times when I first came here and I thought ‘What am I doing here?’

“I really felt my skin here, especially at UCC. For all sorts of different reasons, the university is very white. When I was in Miami, when I was teaching in Miami, I didn’t feel that. I was surrounded by a very thriving Latin-Cuban culture and on a similar level, in Scotland, it’s not like that.

“Universities there are very diverse. But you know, as I began to speak to more and more people, they said to me: you have to help us understand this, how to move forward from this and strengthen this and that’s what has been what’s kept me here because I see there is a lot of promise and there are a lot of people who are saying very, very good things.”

But there are a lot of people who say the opposite, Dr De Sondy said, adding that he was reminded of this recently after reading some of the online comments left under an article he wrote.

“So that gives you an idea of where we’re at. But I’m an optimist, I’m a real optimist and I really believe that we have to have hope and we have to embrace our differences and be able to allow the differences to exist but you know, I think that is very challenging to a lot people.”

Islamophobia exists, he said, but he prefers to focus on the positives.

“People often say to me ‘Aman, do you think people are racist or Islamophobic?’ and I’m like ‘Yeah, of course.’ There are some people like that who exist but I always want to look at the positives. I wonder whether it’s just ignorance, of not having the liberty of being in the company of people who are radically different from you, because that’s how you learn. I say to my students ‘I can make you sit here and read all these books about how Judaism and Christianity are similar, how Catholicism and Sunni are similar, but the experience that you have when you actually sit with a Muslim is going to be very, very different.’”

“Those barriers of being in our little bubble are breaking down through the boom in social media and through how much easier it is to be able to understand because we live in a very globalised world.”

The monotheistic faiths, Judaism, Christianity and Islam, all come from the same root, he points out.

“I’m working on a book at the moment with my former colleagues from Miami; Bill is Jewish, Michelle is Catholic-Christian-Cuban and I’m Muslim, and we’re writing a book together on the history on monotheism. What we’re trying to do is to look at what brings these three faiths together. There’s a lot more that brings us together than tears us apart but sadly there are lunatics and there are crazy people who want to strengthen that divide.”

Dr De Sondy was previously a Religious Education (RE) teacher in Scotland, even writing material about the education of Islam for the Scottish Government.

“One of the best parts of RE that I really liked in secondary and primary schools was the idea of personal search and for me, it’s really important. You can try to spoon feed morality but students have to digest it.

“With my educational background, what I do gather is that you have to set free at some level the enquiring mind of students to make them question and critique and when you do that, religion is a very good subject.

“A lot of these students are coming from very, varied backgrounds and I explain ‘Because the study of religions can be something very, very exciting. It can give you an insight into all sorts of different worlds.”

The first minister is to apologise on behalf of the Scottish government to gay men convicted of now-abolished sexual offences. Nicola Sturgeon will make the apology at the Scottish Parliament to coincide with new legislation giving an automatic pardon to those affected. 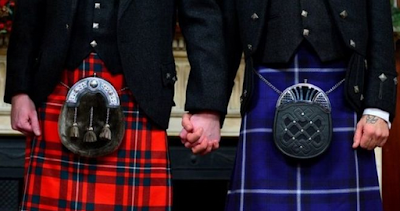 Minorities who were often silenced in the past now push us to consider the society we all want to live in.  Yet I find that offences against minorities, in this case gay men, are often weaved together in complicated patterns with religious, historical and cultural traditions.  And these patterns were set in place in a time where things were very different.  How do we respectfully bring together the past with the present as we look to the future? This is no easy task and often religious communities will speak in clear terms on traditions but the lived realities are very different.  This is where it becomes important for governments to act in fairness and equality. Yet I’m finding the term ‘evolve’ being frequently used by religious leaders too.  Our thoughts have evolved on issues of slavery, race and women’s rights.

I’m faithfully assured that within my own Islamic communities, much is being said and done on these issues too.  There is clearly more to do and for many it can be difficult and challenging placing our current sentiments to history.

In society and also in our own lives, apologies are important but only when we build upon them.  No apology can undo the harm or even the death caused by actions or words.  But they can help strengthen our future by making sure that we build understanding leading to respectful relationships and a society which values differences, equally.  I’m heartened by the students I teach every day who seem to understand and live out differences in ways my generation didn’t.  It is through the humility of accepting a wrong and meeting others who have different lives and beliefs with generosity and compassion that we can build a fairer and brighter society.
Posted by Dr. Amanullah De Sondy at 11:15 No comments: