Acts of Faith: Opinion LGBT Muslims do exist, and they are grieving. It’s time for acceptance. by Dr. Amanullah De Sondy

Muslim Americans. LGBT Americans. One would imagine that the marginalized would unite. 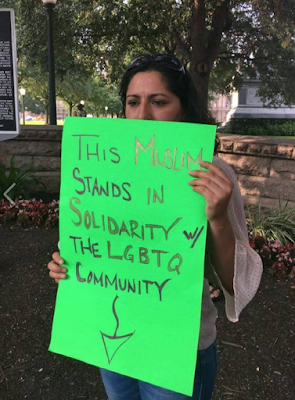 From the straight Muslim man who is profiled at the airport for his bushy, long beard to the transgender Muslim who fears being shunned from the mosque held so dear to heart and faith — is there so much distance?

Yet those who are marginalized are not immune to their own prejudices and phobias. Omar Mateen, who killed at least 49 people in a gay nightclub in Orlando on Sunday morning, offers a chilling example.
I’ve spent more than a decade researching Islamic masculinities, including five years living and teaching in Florida before I moved last year. I have heard some Western Muslim leaders step haltingly toward acceptance. But most of what I have heard, when Muslim leaders speak to the LGBT believers in their midst, is callous disregard or deafening silence.

We can no longer go on without accepting every Muslim of every sexuality. Sunday’s violence in Orlando proves that all too painfully.

As I have monitored the evolving statements of Western Muslim leaders — most of whom are straight — over the years, here’s what I have heard: a slight movement with regard to LGBT issues by some. Many are silent, but some have realized that the issue must now be publicly addressed, especially with the rise of countries adopting same-sex-marriage bills.

There are lesbian, gay, bisexual and transgender Muslims who stand proud in their understanding that they have a God-given right to claim their gender and sexuality. But the religious leaders who speak out at all on LGBT issues say only this — reluctant and guarded — “Hate the sin and not the sinner.” From the discussions I have had informally with these leaders, this is as far as they think they can go without losing their own followers.

This sort of cautious stance echoes repeatedly. Muslim writer Mehdi Hasan headlined his 2013 essay on the subject, “As a Muslim, I struggle with the idea of homosexuality — but I oppose homophobia.” University of Oxford professor Tariq Ramadan wrote before that, “Homosexuality is forbidden in Islam,” but “we must avoid condemning or rejecting individuals.” There are dozens more statements like these only a YouTube search away. 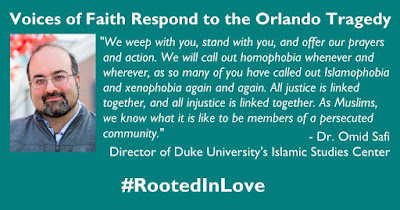 In the anxious day since the shooting in Orlando, this horrific event seems to be making Muslim communities at last stand up and make bolder statements about the LGBT community. But not all offer support. There are those on social media — Muslim and Christian, in the Middle East and the United States — who basically applaud the disgusting actions of Mateen. And surely it is easier to focus on “the other” than to admit that there is a true overlap between the Muslim community and the LGBT community, and between Islamophobia and homophobia.

But today, Muslim communities are saying it: LGBT Muslims do exist. They face both Islamophobia and homophobia every day. And they are grieving.

This is a thorny issue within Muslim communities, who find it difficult to find the rainbow within historical, rigid understandings of the tradition. But it is possible to f 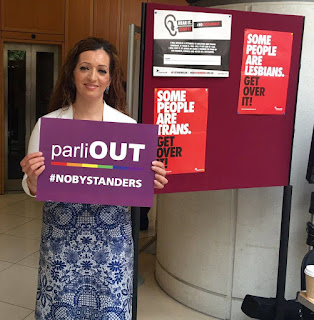 ind different colors of a tradition, text or law if we begin by associating that text with the lives of those who uphold it.

Of course, it is also easy to find the dark, gloom or heterocentric within the Muslim tradition. We must remember that much of this “tradition” was written by heterosexual Muslim men who may have been pressured to uphold particular forms of gender and sexual custom in print.

The challenge for Muslim communities around the globe today is to find and appreciate differences and pluralism and to support the lives of believers who do not fit societal norms. It is imperative if we want to support those on the margins who are hurt and damaged.

We need to think carefully about what goes through the mind of that closeted Muslim man listening to the statements today, who may well end up married to someone of the opposite sex because he fears losing his position in his Muslim community. We need to think carefully about what these statements do to empower heterosexual Muslim individuals, who then stand to represent not just Islam but the “ideal” gender and sexuality. 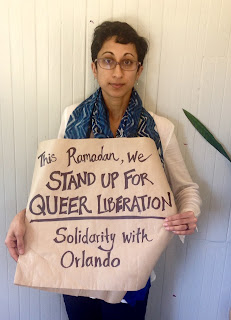 Are the small steps by Muslim leaders enough? Is this slight movement enough to prevent hatred and killing? There is no quick fix to this tension. But just as heterosexual Muslims combat Islamophobia through their loud voices, they must also now listen and accept the voices of LGBT Muslims as equals within the fold of Islam.

Much of our effort in the West to combat extremist ideology relies on building bridges between people, and many Muslim leaders are the first to take to the podium in interfaith dialogue. In light of the Orlando shooting, it is now untenable to have this dialogue of action without including and accepting every face of marginalization within faith communities — especially the LGBT people who are essential partners in our desire for a bright and colorful world.

Amanullah De Sondy, author of “The Crisis of Islamic Masculinities,” taught Islamic studies at the University of Miami. He now lives in Ireland, where he teaches at University College Cork.

Posted by Dr. Amanullah De Sondy at 09:43 No comments: 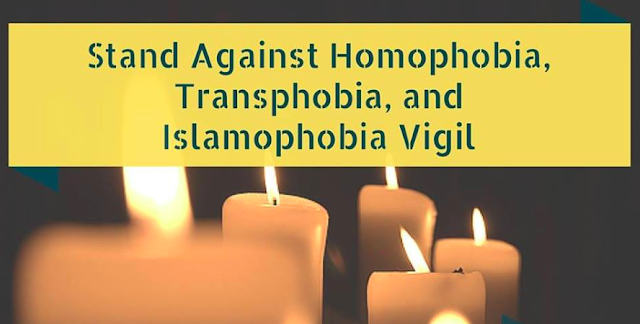 Horrific news from Orlando. I have received several messages from former students today. I taught Islam for five years at the University of Miami in hope to empower the bridge builders.

Today more than ever before I send good wishes and strength to all Muslims in Florida in stamping out hate and fear and confidently standing with the lgbtq communities.

It is now imperative for all those who seek to build bridges between religious communities and none to highlight LGBTQ issues in these exchanges between and amongst.

Islam is justice, peace and love.