Eid Al-Adha: Some Prayers Last Longer Than Others by Haroom Moghal. Published in Huffington Post, Copyright, All Rights Reserved - 05/11/2011

I just wanted to share some brief thoughts on the Muslim holiday.

There are millions of Muslims on the verge of concluding their pilgrimage (hajj) in Mecca; by the time you read this, they're already finished, exhausted and sharing the meat of a sacrificed animal with family, neighbors and the poor. Across the world, hundreds of millions more are putting on their Sunday finest -- thanks to God and the moon and the curvature of space-time for complying with the spirit and the law of the Western weekend -- and heading to mosques. Often way too early in the morning. (Can we comply with the Western sleep cycle?)

It's Eid al-Adha today, the Feast of the Sacrifice, the biggest holiday of the pan-Muslim calendar. Muslims remember Abraham's decision to sacrifice his son, spared only at the very last moment. In honor of that moment, an animal is sacrificed to God and its meat is shared with those close and those in need. The day before was the Day of 'Arafat, when many fast -- as in Ramadan -- in honor of the standing at the plain of 'Arafat, where Muslims on hajj pour their hearts out to God. But really and ultimately, this holiday is about Abraham.

The reason Abraham affects us so is because of his life's tragedies. God is asking Abraham to take the life of his son; rationally, reasonably, that is unbelievable. In the broader Islamic tradition, murder is of course forbidden: We've got Cain and Abel too. And this is sort of what Abraham keeps getting: He doesn't have children until his very old age, and this is a source of great distress for him. As it would be for any of us, but especially in his day and age. And then, when he has a son, God says, dump him in the desert. When he finds him years later, much to his relief and joy -- we can imagine tears of happiness -- God says: Take his life. Show me and the world you love me most.

Abraham's father refused to believe in him. His people tried to kill him. They even made a fire to burn him in, and tossed him in. He wanders alone through the world, without offspring, for years; even married, for a long time he has no descendants. When finally God gives him Isaac and Ishmael, he is asked to leave Ishmael and Hagar (Ishmael's mother) in the wilderness of Paran, the deserts around Mecca. In that stunning, amazing, incredible request, Islam truly and properly begins. The spiritual ground is seeded in a sacrifice that will echo through time, and result in the Prophet Muhammad, Abraham's final heir through his son Ishmael, and the global Muslim community, the Prophet Muhammad's brothers and sisters.

Time and again, Abraham is asked to sacrifice like no normal person is, or could be. He is asked to abandon, or take the life of his child, and God in each case intervenes. God saves. God guides. The greatest destiny unfolds in that tiny, stunning, unbelievable gesture of faith in God against all common sense. Or, as Iqbal put it, discussing Abraham elsewhere:


"Love dove into Nimrod's fire without hesitation / While reason's on the rooftop, merely considering the scene."

This is what Muslims celebrate on Sunday.

That prayers are answered, even if they aren't answered in our lifetime. That God tests us according to our capacity, and those of us who face the most hardship in dignity and fidelity are the most awesome in His sight. That God's promise is true. That the aches and pains in our souls will be healed one day. Perhaps not in this life, though; we must hold on to the rope of God until then.
Abraham was terrified he wouldn't have children. And in return for his faith, God gave him half the planet, Jewish, Christian and Muslim. It may well be that many of us pray more for Abraham and Muhammad than we do for any other families. Including our own. And the Muslim community centers its identity on him. We are his spiritual family, or at least hope to be. Little children of every ethnicity and nationality, all across the planet, stumble across words they will repeat for the rest of their lives, words they're taught to memorize, and often given gifts if they do, words which have an especially profound meaning on us today: 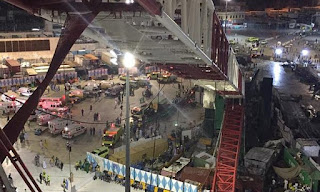 Hats off to the Mail on Sunday for finally apologising for its incendiary headline: “Muslim gang slashes tyres of immigration-raid van”. In the piece in question, an attack on an immigration enforcement van in east London was blamed on the “Muslim community” and “Muslim youths” – even though the faith of the perpetrators was not known, nor relevant. This fact has now been acknowledged by the paper, and it has rewritten the story and issued a correction both online and in print.

In the media, using Islam or Muslims as descriptive terms when referring to criminals remains all too common, even in cases where faith has little or nothing to do with the crime. The Times ran a front-page story in March with the provocative headline “Call for national debate on Muslim sex grooming”. There is nothing in Islam that could justify such heinous acts, and none of those involved in this particular crime cited Islam as their motive. So why was this story headlined in this way when articles about other cases of paedophilia made no mention of the perpetrators’ faith or ethnicity?

When tens of innocent pilgrims tragically lost their lives in Saudi Arabia earlier this month, the Mail Online linked their deaths to Osama bin Laden and 9/11 in its headline: “At least 87 people killed … after giant crane ‘operated by Bin Laden firm’ collapses … on anniversary of 9/11 attacks”, references that mimicked a plethora of rightwing bigots on Twitter. The newspaper did eventually remove the 9/11 reference, and later the Bin Laden link. But the damage was done: the odious headline had already spread across the internet like wildfire.

Should Muslims – and society more broadly – just accept this bigotry? We know sensationalism sells, especially online, where news sources use clickbait headlines and copy to attract readers in a crowded marketplace. And what better way to get people to read an article than by linking it to the far-right narrative that Islam is evil, and that its adherents need to be civilised to become “good Muslims”? It’s a narrative that many Muslims feel is often reflected in government rhetoric as well.

According to an Islamophobia Roundtable in Stockholm, held in June last year, and featuring world-renowned experts on the topic, the regular association of Islam and Muslims with crime and terror in the media and on the internet is vital to the spread of Islamophobic rhetoric.

The real-world consequences of the spread of one of the last acceptable forms of bigotry affects the very cohesiveness of our society. According to the largest survey of its kind in the UK, over a quarter of children aged between 10 and 16 believe Islam encourages terrorism, and almost a third believe Muslims are taking over the country. In addition, 37% of British people who were surveyed admitted they would support policies to reduce the number of Muslims in the country. Is it any wonder that more and more Muslims feel alienated?

This “othering” of Muslims has also manifested itself in a growth in hate crime: a 70% rise in the past year according to the Metropolitan police. We now live in a country where most Muslims know someone who has suffered from Islamophobic hate or abuse.

Advertisement
Of course, the media should not be held responsible for violence against Muslims – that is the liability of the attackers. But with over 90% of reports about Muslims taking a negative angle and playing up faith, even when irrelevant, it is not reasonable to deny that the media plays a key role in the development of anti-Muslim hatred.

So what can be done?

First, build awareness. According to research presented at the Muslim News’ Conference on “Reporting Islam and Muslims in Britain” last week, there have been improvements in the language that is being used, but religious illiteracy remains rife within parts of our newspaper elite. Until recently, a managing editor of a major national newspaper did not know that “jihad” had multiple meanings, and that “fatwa” did not just mean a death warrant. The lack of comprehension on a topic that is part of the bread and butter of newspapers today is deeply distressing and its role in editorial decision-making cannot be understated. I would like to think that this is due to sheer ignorance rather than pure malice, which is much harder to tackle.

Second, diversity. There is an under-representation of all minority groups, but particularly Muslims, within the media – especially within senior positions – and greater diversity will improve coverage and help combat misreporting. This requires greater outreach on the part of media organisations to bring in talent from all backgrounds through diversity programmes, paid internships and fast-track schemes to proactively close this gap.

The final piece in the jigsaw is regulation. Clause 12 of the Editors’ Code of Practice says: “Details of an individual’s race, colour, religion … must be avoided unless genuinely relevant to the story.” The problem is that this protection only extends to individuals and not to groups, which is why Katie Hopkins was able to get away with her infamous comments comparing refugees to “cockroaches”.

The arguments about censorship and free speech are complex – but Jonathan Heawood of the Impress Project, an independent monitor of the press, believes the Editors’ Code should incorporate Lord Leveson’s suggestion that this clause is broadened to include groups. This would allow representative groups to hold the media to account for using “Islam” or “Muslims” where it was not “genuinely relevant” to the story.

We are equal members of society and demand fairness, not favours. Avoiding daily smears, group libel and the violent consequences is not too much to ask of the nation’s editors.

Posted by Dr. Amanullah De Sondy at 05:25 No comments: