Abu Bakr al-Baghdadi proclaimed Islamic State as a Muslim caliphate on June 29, 2014, with himself as caliph, a term reserved for a successor to the prophet Muhammad. His would be the newest caliphate in a line extending from the Rashidun Caliphate (632-661), through the Umayyads (661-750), Abbasids (750-1517) and Ottomans (1453-1924). Each of these earlier caliphates, however, had a feature that the Islamic State lacks and which may not even be possible for the newly proclaimed “state.”

The Ottoman Chief Eunuch was an influential figure. In this and other caliphates, eunuchs supervised the harem, the princes, the financial affairs of the palace and the mosques, as well as controlling access to the ruler. Photo postcard 1912 (Image 1)

Currently, the Islamic State is more of a marauding horde than functioning state. It operates more like the Vandals or the Ostrogoths of European history rather than any historic caliphate. Its “citizens” are self-described warriors (jihadists) killing men, capturing women and grabbing booty as they go. Many of its fighters are foreigners from Europe, North America or other Middle Eastern countries, rather than locals who are the core citizenry for anything that can legitimately be called a state.
Beyond effective use of social media for recruitment, there appears to be little of the governance that makes this state a true state. The Islamic State’s goal is clear: “purifying” Islam through elimination of competing religious ideologies, whether they are held by other Muslims, such as the Shiite, or practitioners of other religions, such as the Yazidi and Christians.

What is a state without a capital?

While al-Baghdadi has appeared in the Syrian provincial capital of Ar-Raqqah, the Islamic State has yet to establish a proper capital. A true state needs a central place to which taxes are paid and from which laws, regulations and other administrative functions descend. Thus far, funding for the Islamic State seems to come largely from smuggling oil, extortion and bank robbery, and not from taxpaying citizens.

Creating a stable capital will be difficult. With the weaponry the Islamic State has acquired, it can fight a ground war. But previous caliphate capitals had walls to protect their seat of government from attack. Such defenses would be ineffective now. As the recent air assault by the United States and its allies shows, a Topkapi today would be fragile in the face of modern ballistics.

No above-ground capital would be safe for the Islamic State. To protect its control center from bombardment, the caliphate would need to bury itself in tunnels, like termites (or al-Qaeda). But even a buried bastille would need to be some 60 meters down to be safe from bunker-busting munitions like the GBU-57A/B Massive Ordnance Penetrator.

Should the Islamic State manage to create a political state with a capital, how closely could it model its governance upon the historic caliphates it claims to emulate? In all preceding caliphates, power was demonstrated, in part, by the number of women the caliph controlled. Hundreds of women were impounded in the palace from which government decisions emanated. Most of the women were not for sexual pleasure, but simply to demonstrate dominance.

At the moment, the Islamic State’s systematic killing of men and taking of women performs as a predatory horde rewarding its warriors more than as an organization developing the governance of a true caliphate. A core question is whether the new caliph will be able to maintain and control the women he acquires as well as his predecessors did. And who will handle the daily governance for the new caliphate to maintain cohesion in the state?

All previous caliphates relied on a special class of bureaucrats to provide stability and statesmanship. Those were eunuchs, who were unable to impregnate the women sequestered in the palace. Eunuchs were without family and dependent upon the caliph for support. For four millennia and through many different Asian empires and caliphates, eunuchs proved themselves to be efficient governors. Their presence was, again, a sign of the power and authority of the ruler.

The number of women and eunuchs in the central palace during the various caliphates could be quite large. The Caliph al-Muqtadi (908-932) presided over a palace that contained 4,000 women, 7,000 eunuch guards and menial laborers, plus 4,000 eunuch bureaucrats to administer the realm.

When the Fatimid caliphate fell in 1171, the seat of government had 12,000 members. Only Caliph al-‘Adid and his immediate male relatives had intact testicles. The rest were women and eunuchs.
As long as the Islamic State persists in beheading rather than castrating the males it captures, it has little hope of resurrecting a historic caliphate. Granted Islamic State is already acquiring women, but it has no one to guard them for the caliph and no infertile functionaries to enact the authority of the state.

While it has been less than a century since the fall of the Ottoman Empire, it is clear that a key concept for continuity with the great caliphates of the past has been lost. Simply stated, if the Islamic State doesn’t build a deeply fortified city and start producing eunuch bureaucrats, it will never have the stability and endurance of historic caliphates. The best it can hope for is to be recognized as a 21st-century predatory horde.

It is an academic question as to which is more barbaric: to behead (murder) or to castrate (mutilate). But of the two choices, if Islamic State continues along its current path, it is likely to be remembered like the Vandals – that is, as murderous marauders who get a brief mention in high school history classes.

There is no reason to believe that the state the Islamic State aims to develop will be less barbaric than its fighters’ current “jihad.” But al-Baghdadi will have to change how his followers process prisoners if he is sincere about getting his caliphate up and running.

'Violent' Muslims? 'Amoral' atheists? It's time to stop shouting and start talking to each other The logic of blanket statements falls apart when you’re confronted with the diversity of the religious and nonreligious experience 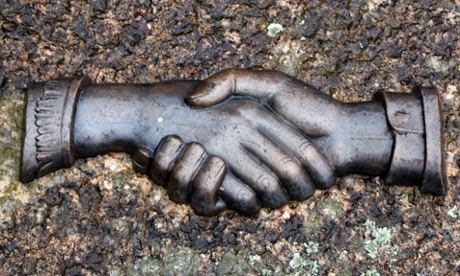 Lost in the venomous arguments that have recently been flying back and forth between Muslims and atheists – on HBO and on op-ed pages, in the United States and beyond – is just how much these two marginalized, underrepresented groups have in common.

According to a Pew poll conducted this year, Muslims and atheists are the two least favorably viewed religious or ethical groups in the US. Both communities are severely underrepresented in the general population – roughly 2% of Americans identify as atheists, compared to 1% for Muslims. Both face rising levels of animosity from the general public. And both tend to be defined by the loudest voices within their communities.

The media may be saturated with images of Islamic terrorists and suicide bombers, but a 2011 Gallup survey concluded that Muslims are actually more likely than any other religious or ethical group in America to reject violence against civilians. At the same time, the vocally “anti-theist” atheists who dominate the airwaves and the bestseller lists may get all the press, but a 2013 study from the University of Tennessee indicated that less than 15% of atheists fall into the “anti-theist” category.
So why hasn’t there been more dialogue and solidarity between Muslims and atheists? Can’t we all just get along?

The divide has to do in part with our natural inclination to retreat into our own communities or get defensive when confronted with difference. As a result, stereotypes about both groups not only go unchallenged – they become amplified as each side clings to its preconceived notions of the other. While it’s certainly not the only cause, the amplification of this “us against them” attitude has contributed to large majorities of Americans labeling Muslims as “violent” and atheists as “amoral”.
The irony is that when atheists and believers get to know one another, they often discover that many of their values are not so different after all. That is something that we, a Muslim and an atheist, have learned from our friendship – even as we acknowledge our differences and disagreements.

We’re not alone in recognizing the power of relationships to overcome differences. Research shows that simply knowing someone from another religious or ethical group often leads to more positive views of that group. That’s why personal relationships are indispensable when it comes to changing how we talk about religion and atheism. When you know and admire a Muslim or an atheist, it no longer makes much sense to make sweeping generalizations about either group as made up of fanatics or bigots. The logic of blanket statements falls apart when you’re confronted with the diversity of lived religious and nonreligious experience.

When 46% of Americans think Islam is more violent than other faiths but only 37% even know a Muslim, and when atheists remain one of the most distrusted groups in the country, it’s clear that a conversation between these two communities could benefit both. But that won’t happen until we Muslims and atheists commit to spending less time speaking past one another and more time speaking with one another.

Of course, this doesn’t mean that Muslims and atheists will suddenly find themselves in absolute harmony. We will continue to debate and argue with each other, confident that our conversations may bring to light as many challenges and contradictions between our communities as they resolve. Pluralism isn’t relativism; it isn’t the erasure of differences, or even its embrace. It is the recognition that differences exist, and that the resolve to engage them is a good thing, a necessary thing.

Nor does it mean that we should only lift up the best in ourselves and others while whitewashing the real problems that exist in both of our communities. There is a great deal of work to do in the Muslim community concerning attitudes about and practices affecting LGBTQ people, ex-Muslims and women. At the same time, the atheist community continues to struggle with fraught debates over anti-theism, sexism and racism among atheists. But as we work to address these problems within our communities, we can also benefit from looking beyond our borders and learning from those outside.
Or we could just go back to shouting at each other on TV.

Posted by Dr. Amanullah De Sondy at 14:01 No comments:

BBC News - Is it sinful to be in contact with dogs? Islam and Dogs