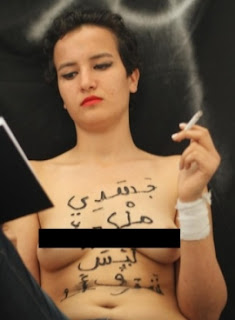 When a young woman in Tunisia named Amina posted a photo of herself with the words “My body belongs to me and is not the source of anyone’s honor,” written on her bare torso in Arabic, she most certainly meant to cause a stir. It is unlikely, however, that at 19 she intended to invite death threats, such that she would soon be feeling the need to leave her home country.

Not surprisingly, a number of Western women felt moved to show their support for Amina. An international movement called Femen staged bare-breasted protests in European cities, in which the writings on their chests echoed Amina’s, along with “Freedom for women” and “Fuck your morals.” (Be warned: photos contain nudity and strong language.)

But Femen did not have the last word. Almost immediately, there was a backlash from some Muslim women who did not appreciate the “support.” A Facebook group, Muslim Women Against FEMEN, has encouraged Muslim women to post photos of themselves—in whatever they choose to wear—with sentiments such as “Do I look oppressed to you?” or “Nudity DOES NOT liberate me and I DO NOT need saving.”

A number of commenters in the group, in fact, seem to think that Femen members are the ones who are oppressed.

I myself have experienced these events as something of a roller coaster ride. As someone temperamentally shy about my body, I was both horrified and impressed first by Amina’s courageous statement, and later by the Femen protesters. But I also feared for their bodily safety; misogynists, it seems to me, could easily find in a woman’s public nudity her permission to objectify, touch, rape, or even murder her.

At the same time, I sympathized with Muslimah Pride’s irritation at Western feminist arrogance, and felt somewhat ashamed. We are always so ready to pounce when non-Western women are threatened. Indeed, as scholar Lila Abu-Lughod points out, even Americans who are not feminists—often on religious grounds—seem ready to fight wars in the Middle East, ostensibly in order to “save” oppressed Muslim women. Moreover, I tend to agree with Muslimah Pride that the freedom to strip is far from the pinnacle of women’s liberation. (I much prefer the freedoms to speak and write, to work, to vote, to parent, to own property and the like.)

In the end, small-f feminism is as diverse as the women (and men) who participate in it. If Tunisians and Ukrainians want to get naked in order to make a statement, more power to them. And if Pakistani or Parisian women want to tell these women off, so be it. Each of them will reap consequences, both predictable and unpredictable. None of us can control the effect our words, actions, and images have on other people, so we do the only thing we can do: we gather in communities of common understanding, around people who affirm us and make us feel normal. But perhaps with increased visibility—with nakedness, so to speak—can come increased tolerance, and eventually, an increase in compassion, without which there is no understanding.

Kate Blanchard is Associate Professor of Religious Studies at Alma College in central Michigan. She is the author of The Protestant Ethic or The Spirit of Capitalism: Christians, Freedom, and Free Markets (Cascade 2010) and co-editor of Lady Parts: Biblical Women and The Vagina Monologues (Wipf & Stock 2012).
Posted by Dr. Amanullah De Sondy at 21:50 No comments: