This was forwarded to me by one of my blog readers.  This is truly a wonderful story!  Even though I have reservations about how inclusive the tie is, an Islamic tartan tie that saves the day for our First Minister is just fantastic! Bravo! 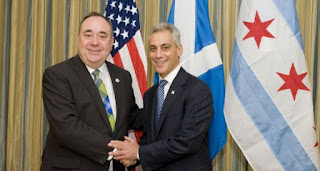 First Minister Alex Salmond’s reputation was unexpectedly saved by a Scottish Islamic Tartan tie on Friday. During an intimate reception at the Chicago Council on Global Affairs, Salmond spilled coffee on his tie shortly before he was due to attend several important meetings, including one with Chicago Mayor and Obama’s former Chief of Staff Rahm Emanuel.

Fortunately, Executive Director of the Scotland Institute Dr Azeem Ibrahim had presented the First Minister with an official Scottish Islamic Tartan tie beforehand. The First Minister quickly swapped his stained blue tie for the distinctive green and blue tartan version after delivered a stirring speech to the assembled delegates, including an amused Dr Ibrahim.

Salmond was visiting Chicago as part of a delegation to promote sport, trade and culture at events around the Ryder cup ahead of the 2014 golf tournament at Gleneagles, Perthshire. When contacted by ScotsPolitics.com, Dr Ibrahim stated:

“I am delighted that when the time came I stepped up to save the honour of the First Minister and my country. I almost feel like a modern day William Wallace. I have written to the First Minister’s Office and the Palace to let them know I am available to receive a Knighthood at anytime. Strangely, I have not heard back from them yet. Maybe they are planning something big like a new Honour just for me – the Saviour of Scotland or something. Who knows?” 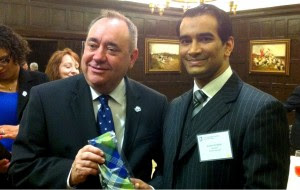 The Scottish Islamic Tartan was launched in July by Dr Ibrahim as a celebration of the great contribution that Scotland and Islam have made to humanity and weaves the diverse Muslim identity into the fabric of Scotland to provide an enduring symbol of the deep connection between these two great civilisations.

Leading tartan designers and Islamic scholars were consulted in the design of the tie, resulting in a unique style based on the following
- Blue to represent the Scottish Flag
- Green to represent the colour of Islam
- Five white lines represent the five pillars of Islam
- Six gold lines the six articles of faith
- Black square pattern represents the Holy Kabah.

The Tartan was milled at the world’s last specialist mill, DC Dalgleish. Using only original production methods on traditional shuttle looms, DC Dalgleish maintained the rich heritage of Scottish tartan with integrity and reverence for the Islamic tradition.
The Tartan can be seen here: www.islamictartan.com
Posted by Dr. Amanullah De Sondy at 08:38 No comments: