At the 2010 Rethinking Islamic Reform conference, Islamic scholar, Hamza Yusuf, gives his audience a glimpse into the Islamic tradition that supports female-lead prayers:

“Now, in terms of what is legitimate renovation, or tajdeed, I would argue that the Islamic tradition is a vast tradition. The Islamic tradition is largely unread. Even people now that are studying in madrasas, studying at shariah colleges, do not go deeply into this tradition. This is simply a fact. I will give you one example: when I wrote a paper on female prayer – because this was an issue a few years ago. Years ago, when I was a student in Mauritania, I remembered in a book that Ibn Ayman from the Malaki madhab considered female prayers was permissible in that madhab. And I remember as a 21 year-old student underlining that. I actually went back to that book and found my underlining of that statement. When I studied the prayer issue, I was so struck by the fact that not only was it debated early on but there were multiple opinions. Imam Tabari considered it permissible for women to lead the prayer if they were more qualified than men – to lead men in prayer. Ibn Taymiah himself permitted women to lead men in prayer if they were illiterate and she was literate. He just said that she should lead from back because she might distract the men if she was leading from the front. Ibn Taymiayah permitting a woman to lead men in prayer. This is the tradition. It’s all there. People have no idea how many of these issues were already examined and discussed. And incredible erudition and energy went into this. So if you look, I would argue that the Islamic tradition has within itself all of the needs to renovate the house. But it’s going to take an immense amount of intellectual energy. It’s going to take very, very highly qualified people which necessitates institutions that can train and produce the types of people that are needed to engage in this activity.”
Posted by Dr. Amanullah De Sondy at 13:30 1 comment: 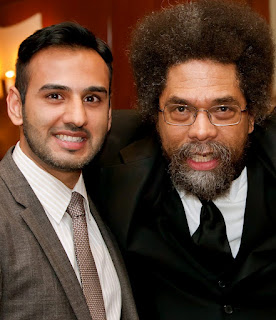 by Saira Sumbal on Feb 26, 2012 • 8:11 pm
Published by the Miami Hurricane - the student newspaper of the University of Miami, all rights reserved, copyright

Cornel West spoke to students at the BankUnited Center on Thursday as part of the University of Miami’s celebration of the 50th anniversary of desegregation on campus. During the event titled “Diversity & Democracy: An Evening with Dr. Cornel West,” the notable intellectual and advocate for social justice spoke to a packed audience of UM students, faculty and staff.
West spoke to the crowd tackling issues of race and society in the United States.

A call for self-realization or “learning how to die” was a major part of West’s message to the crowd.

“The one thing that I took away from it is that he said that we were born to live to die. We are here on this earth to make an impact. I think basically he was saying that we should not be afraid to stand up for what we believe in. We should always be engaging in discussion and not be silent,” said Kristyn Greco, a junior majoring in creative advertising and international studies.

The lecture kicked off with an introduction from associate professor Edmund Abaka of the history department who spoke about the 50th anniversary of desegregation at the University of Miami. Following professor Abaka was an introduction of West by President Donna E. Shalala.

University of Miami Board of Trustees made history when in 1961 they made the decision to eliminate a color barrier and admit students regardless of their racial background. Since this effort to admit students “regardless of race, creed or color” the university has made it a priority to have a diverse student population. The University of Miami is reported to have a student body that represents over 90 different countries today alone.

The lecture given by West is part of an effort by the university to celebrate this diversity and the institution’s anniversary of desegregation.

“There was not a negro problem in 1961, there was a catastrophe problem called Jim Crow,” exclaimed West in his lecture when talking about the monumental event in civil rights.

In an intimate gathering prior to the lecture, a select group of students, faculty and administrators were able to meet West. Professor Amanullah De Sondy, visiting assistant professor in the department of religious studies, was present at the gathering and talked about why it is important to have a speaker like West come to campus.

“He’s so inspirational and he pushes us out of our comfort zone and has the ability to give us the drive to move forward,” De Sondy said. “I think that drive for me as a professor is important because students need to have that push in their academic life because one’s academic life goes hand in hand with life.”

West made a surprise appearance prior to his lecture at a vigil held by Student’s Towards a New Democracy. The Vigil was being held in solidarity with Black History month and to address issues of inequality that exists for University of Miami’s Chartwells workers. The organization invited West as a guest but had heard no confirmation that he would appear.

Students were surprised when West voluntarily took to the podium to say some words.
“I was told there are some precious, priceless food workers who are not being treated as they ought, let’s salute them,” he said.

West continued to speak upon desegregation as he surveyed the crowd.

Senior Ryan Williamson said it was important to him to have West come and speak.
“It’s important to have public intellectuals in our lives,” he said. “Cultural gurus like Cornel West have a message to bring to students. I think his message is one that’s more relevant today than ever.”

Posted by Dr. Amanullah De Sondy at 10:25 No comments: