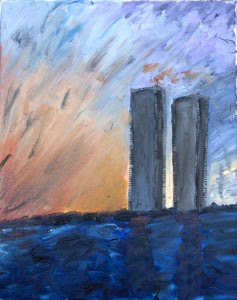 Sitting in her sixth grade science class inside Simon Baruch Middle School on East 21st street and 2nd avenue in Manhattan, 11-year-old Alexis de Seve thought all of her classmates were in trouble the morning of Sept. 11. One after the other, she heard the loudspeaker call for her friends to head downstairs to the main office, thinking they would each visit the principle and be reprimanded for something they did wrong.

But before her name was called, someone pointed outside the window and glared at the clouds of black smoke rising in the distance. There was no television inside the classroom and her teacher seemed oblivious to the rare occurrence. No one knew what was happening.

So when it was finally her turn to leave class, de Seve was surprised to see her dad and not the principal. Without understanding it himself, he briefly tried to explain where the black smoke came from – just a few miles south.

They rushed back to their Midtown home to reunite with family and gathered over live coverage of that morning’s events. Confused and not sure how to react, de Seve yelled out, “Those bastards!”

Not far from Simon Baruch Middle School, Tal Levy’s parents immediately rushed to pick up their 9-year-old daughter from school after seeing both towers of the World Trade Center up in flames. Levy, too, wasn’t sure how to react.

Forty-five minutes from Manhattan in Westfield, New Jersey, 12-year-old Melanie Jackson left school in the afternoon but wondered why so many others had left in the morning. The reason quickly became clear, however, when instead of the school bus, she noticed her mom at the school entrance and stared at the sky of grey ashes in the distance.

And in Maplewood, New Jersey, with a view of lower Manhattan on one side of town, 11-year-old Alexander Goldstein sat in social studies and saw the first tower of the World Trade Center collapse on live television. Goldstein turned around to the student behind him and said, “I bet you it was a terrorist.”

Though de Seve, Levy, Jackson and Goldstein were all close enough to see the smoke clouds take over the Downtown Manhattan skyline, they each paint a similar picture of bewilderment, one that was pronounced not just in New York City, Washington D.C. and Shanksville, Penn., but across the country.

A decade later and now students at UM, the four of them vividly described and remember pivotal moments of Sept. 11 – from classrooms emptying before noon, to New Yorkers crying in the streets.

While a majority of college students can presumably describe the Sept. 11 attacks in a few seconds, it is unclear as to how the activities have influenced a society of individuals who have come of age in a post 9/11 global community – a community that has become accustomed to hearing of “terrorism,” al-Qaeda, weapons of mass destruction, Osama Bin Laden, Afghanistan, The War On Terror, drones, water-boarding, T.S.A. and hijacking.

According to a study conducted by Arizona State University and the University of California, Irvine, “Research conducted in the aftermath of the September 11th terrorist attacks (9/11) suggests that, except for those who directly witnessed or suffered loss from the attacks, for most children the emotional impact was relatively transitory.”

It is unquestionable that 9/11 had a direct impact on the lives of every individual in this country, both young and old; it not only influenced political and social points of view, but perceptions on religion.

“There is a lot to be done. There are still forces that try to separate and to burn bridges,” he said. “And where there is one person who tries to create havoc and mayhem, there are other people who try to build bridges … do good … and create harmony and peace in society.”
Posted by Dr. Amanullah De Sondy at 09:33 No comments:

Out of the Shadows of 9/11: Professor Hussein Rashid on faith’s role in social change

Out of the Shadows of 9/11: Professor Hussein Rashid on faith’s role in social change from Kellie Picallo on Vimeo.

Posted by Dr. Amanullah De Sondy at 09:10 No comments:

Is the US ready for 'Little Mosque on the Prairie'?

Influential American broadcaster Katie Couric has suggested a way to change attitudes to Muslims in the US. Pointing to the success in the 1980s and 90s of TV sitcom The Cosby Show in improving relations between African-Americans and whites, she argues that a Muslim version of the show may counter some Americans' negative perceptions of the community.

But just across the border, in Canada, this "Muslim Cosby Show" already exists. Little Mosque on the Prairie, made in Toronto, is recording its sixth and final series. On the set, actors and crew are getting ready to record this season's big opening scene.

Zarqa Nawaz
Even the executives who made Little Mosque were worried when it went on air
Zarqa Nawaz, programme creator

The production team are giving pointers to the show's main characters, who are standing at the check-in desk in a disused ferry terminal that is doubling as an airport: "You're expecting to be racially profiled, so you're already offended before he's done anything, you're wound up, ok? Let's try the scene one more time."

Amaar Rashid, played by actor Zaib Shaikh, and his wife Rayyan Hamoudi, played by Sitara Hewitt, are returning from honeymoon. Rayyan is expecting comments at customs because of her appearance. "My dad decided to stay in Lebanon, even though - and wait for it - he's Lebanese... but he's not a suicide bomber. Not ALL Muslims are suicide bombers you know," blurts Rayyan to the customs officer. "Why would you say that?" mouths husband Amaar, and tries to change the subject.

Rayyan interjects: "Oh, and before you ask, no, my husband doesn't make me wear this hijab, I choose to wear it." The man from customs simply pokes fun at the couple for arguing.

Little Mosque on the Prairie is not all terrorist jokes, but there is a decent helping. Although its humour has been described as more like the gentle UK sit-com Vicar of Dibley than the black humour in film Four Lions, which followed a group of would-be suicide bombers. Little Mosque has been shown in over 80 countries, but not in the UK or US

This is a sitcom about Muslims and Christians trying to live in harmony in the fictional town of Mercy in Saskatchewan, Canada and it charts the arrival in town of a modern Canadian-born imam. "Even the executives who made Little Mosque were worried when it went on air, about how 'the community' would react," says Zarqa Nawaz, creator of the programme. "For sure, some very orthodox Muslims said this is wrong, that we shouldn't be doing this. But I felt overall the majority of the Muslim community felt it was innocuous... it was funny... they formed their opinions based on whether they liked the show or not." Of course the show has not escaped controversy, but not always from the most obvious places.

Last year Wikileaks published a diplomatic cable from the US embassy in Ottawa to Washington warning that the programme was guilty of what it called "insidious negative popular stereotyping" of Americans in Canada. This was thanks to satirical depictions of an over-zealous US border official on the show.

On hearing about this minor diplomatic spat, American/Canadian executive producer Mary Darling immediately sent a package to the White House - the "offending" episode of Little Mosque wrapped up in a bow. Our show has allowed people, whether they're Muslim or non-Muslim, to look at each other and say: 'Oh yeah I get it'
Actor Zaib Sheikh

To her surprise a reply came back from US Secretary of State Hillary Clinton herself, thanking the show's makers for "everything you're doing to foster cross-cultural unity and understanding through comedy". Ms Darling is adamant they try hard not to lecture on the show.

"At the end of the day we're talking about the oneness of humanity, normalising the 'other'. But comedy isn't earnest, comedy isn't preachy." Those involved in the making of the show insist it is about normal life, and want to show that Muslim parents take their kids to football or hockey practice too.

But they also stress it is important that Muslim characters do not always have to be potential extremists or bear labels, such as the "lesbian Muslim".

Zaib Sheikh who plays the central character of Amaar, the liberal imam, does however defend the need for a few border control jokes. "I think that's reflective of the times that we live in," he says. "As a Muslim, I myself am involved in moments of deep hilarity in real life when I'm at the check-point and someone says 'random check' and checks my passport.

"I look across the line and no random checks are going on for anyone else who is not my skin colour, and doesn't have my last name of Sheikh. I have to laugh at that." The rights for Little Mosque were acquired by US TV network Fox, but the show was never remade.

Creator Zarqa Nawaz says she has come up with something at least very close to the "Muslim Cosby Show" four times already, but nothing has made it to the pilot stage in the US. Actor Zaib Sheikh thinks this is a shame:

"I think Katie Couric was right," he says. "Our show has allowed people, whether they're Muslim or non-Muslim, to look at each other and say: 'Oh yeah I get it'." "We had a fan of the show who said: 'I love what you do on Little Mosque and that's pretty high praise coming from a Jew'."
Posted by Dr. Amanullah De Sondy at 12:02 No comments: