It’s been difficult to get away from Christmas carols and hymns being sung and played this festive season. Thinking about music and lyrics, I’ve been comparing different types of music lately. Growing up in a house where Pakistani and Indian music was always played, I’ve been continually challenged when comparing music from India and Pakistan to western pop.

The song that has really struck me in the last few days is, ‘I’m sexy and I know it’. The video is a parody to those who believe that sexiness is linked to a muscled, perfect body. And to strengthen this message the average bodied men frequently shout, ‘I work out’. At face value, it’s quite hysterical but the academic in me sat back and thought, ‘this is actually quite clever’. Especially when I compared it to a hit Bollywood single titled ‘Munni badnaam hui, darling teray li’ay’ which basically translates as ‘Munni was disgraced, for your sake darling’. In this video you see Malaika Arora shifting the focus of ‘badness’ from her to all the men dancing around her.

Both of these songs seem to be making statements about how we look to define and understand male and female bodies. In a world where ‘body’ seems to be taking over from ‘matter and mind’. I’m all too aware of this important message living in South Beach Miami these days where everyone and their dog is rollerblading down ocean drive, and I do mean that literally. These two songs seem to draw a bridge in values from western pop to eastern bollywood. It reminds me of the powerful statement that Lady GaGa made at an awards ceremony when she wore ‘raw meat’ as a dress, pushing us to think about who we are and what we wear. 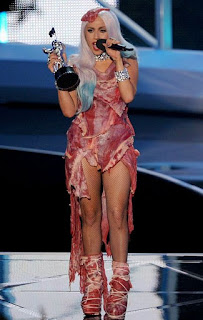 As a Muslim, I believe that a healthy body is important for me to carry out the obligations I commit to, yet finding that balance between healthy body and a cosmetic body is a challenge to us all today, especially after we may have indulged in a little too much Christmas pudding. So let’s all start the New Year with, ‘I’m sexy and I know it’!
Posted by Dr. Amanullah De Sondy at 00:03