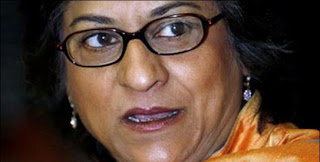 In her first comment on the LHC order, Ms Jahangir expressed surprise that a stay had been granted on an action that was yet to take place. She disapproved of the idea of suspending the constitutional prerogative of the executive.

“If they want to get popular there are other ways to do it. Do not twist the laws as court verdicts become precedence,” she remarked.

Ms Jahangir was speaking at a seminar on ‘The blasphemy laws: a call for review, organised by Jinnah Institute,’ a think-tank launched by former information minister Sherry Rehman.

Constitutional expert Basharat Qadir read out article 45 of the Constitution which empowers the president to grant pardon, reprieve and respite, and to remit, suspend or commute any sentence passed by any court, tribunal or other authority.

Ms Jahangir criticised the blasphemy law in its present form and observed that laws should be made to protect religious minorities and not to provide a tool to some people to exploit it in the name of religion.

She said people did not want to commit blasphemy. “I have never seen anybody committing blasphemy. Why would somebody do it in front of a religious leader.” She pointed out that most of the time the complainant was a religious leader. She said only a mad person would do it and mentally challenged persons deserved mercy.

Federal Minister for Minorities’ Affairs Shahbaz Bhatti said the law was created by Gen Ziaul Haq to appease religious elements with a mala fide intent to prolong his rule. He said he had recommended repeal of the amendments to the law introduced by General Zia or some significant changes. He said the president had announced formation of a high-level committee which after consultations with all stakeholders, including religious scholars and political leaders, would submit its recommendations to the parliament.

Chairperson of the National Commission on the Status of Women (NCSW) Anis Haroon said the commission was concerned about Aasia Bibi’s security. She said minorities were not harming the interests of the country.

Former chairman of the Council of Islamic Ideology Dr Khalid Masood said there was ‘religious illiteracy’ even among the literates. He said nowhere in the Holy Quran there is mention of death sentence for those committing blasphemous acts.

Other speakers, including Sherry Rehman, Tahira Abdullah and Ali Hassan, rejected the blasphemy law as discriminatory and called for either repealing or suitably amending it.
Posted by Dr. Amanullah De Sondy at 11:39 No comments: