For some, "Burqavaganza" is a funny love story in the time of jihad. For others, it mocks Islam. The government's recent ban on the play highlights Pakistan's liberal-conservative divide.

Posted by Dr. Amanullah De Sondy at 12:56 No comments: 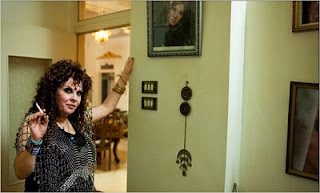 “My films criticized the double standard of the Eastern man. He studies in Europe, but he comes back East and returns to his old attitudes,” said Nihad Alaeddin.

NIHAD ALAEDDIN was once one of the great sirens of Syrian cinema. Working under the stage name Igraa, or Seduction, she embodied the openness and liberalism that reigned in the Arab world during the 1960s and ’70s, performing the region’s first cinematic nude scene and flippantly telling journalists that “we have to bring sex to the cinema because our audience is frustrated.”

Now, after 15 years of self-imposed seclusion, she has returned as a ferocious critic of the Islamist wave sweeping the Middle East, and her courage has drawn the admiration of a younger and more constrained generation of actors and filmmakers. A multipart documentary about her appeared on Syrian television last year, and a prominent Syrian director is now working on a film about her life.

Unlike many other actresses of her era, she refuses to apologize for any of her numerous risqué roles, and even defends her sexual freedom in a way that is almost unheard of in this increasingly conservative country.

“Men have this hypocrisy nowadays. If the girl wears a hijab she must be honest,” Igraa said in a voice ragged from chain-smoking, during a late-night interview at her Damascus apartment. Today’s Islamic conservatives, she said, are mostly “liars” who “criticize others but don’t truly believe themselves.”

“The whole issue of the hijab has become an excuse for hunting down other people,” she said.

She laughed and added, “This kind of talk could get me hanged.”

Igraa’s own family has been split by the Islamist trend. As a teenager in the late 1950s, she traveled with her older sister to Cairo, where an Egyptian impresario renamed them Seduction and Charm and made them a successful belly-dancing duo who toured Europe and Asia in daringly scanty outfits.

Then in the late 1970s the Islamic revival began, taking with it Igraa’s sister. She took the veil and became a conservative Muslim, discarded the name Charm, and now refuses to talk about her belly-dancing past, though the sisters remain on speaking terms.

As for Igraa, who still uses that name, she now lives mostly nocturnally, rising in midafternoon. Her apartment is a decaying museum of her own career, with dozens of pictures of her alongside bizarre collections of cheap trinkets and stuffed animals. In her late 60s, she still dresses like the precocious teenager she once was, with tight jeans, pancake makeup and a spectacularly bouffant wig hiding her gray hair. She married only eight years ago, to a man decades her junior, and has never had children.

BORN in Damascus to a lower-middle-class family, she dropped out of school in the fifth grade and moved to Cairo at the age of 13. After training with the legendary Egyptian belly dancer Tahia Carioca, she danced with her sister for several years, and then began acting in television dramas. She went on to become a leading actress, screenwriter and director.

“There was a kind of bloom of freedom in those days,” said Nabil Maleh, a Syrian director who helped to make Igraa’s career.

Igraa’s breakthrough came in 1970 with the film “The Leopard,” widely considered to have established modern Syrian cinema at a time when Egypt dominated the business. During filming, the producers and director worried that the story — about a Robin Hood figure in the mountains of northern Syria — might not get the attention it deserved without some kind of lure. They asked Igraa, who played the protagonist’s wife, to do a nude scene. She surprised them by agreeing almost at once. By modern standards, the film is scarcely racy at all: a few glimpses of flesh during a muted love scene. But at the time, it was profoundly shocking.

“I felt like a suicide bomber when I was making this scene,” she recalled. “To do such a scene in Syria — I knew there would be criticism.”

There was criticism, but the film was a hit. People traveled in packed buses from remote towns to the movie theaters in Damascus and Aleppo. Igraa was defiant about her role, and when she was asked to blame the director and producer, she refused, saying they had done the scene with her full consent.

She went on to make dozens of other films, many of them tawdry affairs with a lot of bikini scenes and not much plot. But she also wrote 25 screenplays, and she casts her work as an effort to break down patriarchal attitudes toward women.

“My films criticized the double standard of the Eastern man,” she said. “He studies in Europe, but he comes back East and returns to his old attitudes. If he could lock his wife and sister up, he would.”

To some younger filmmakers, her standing as an artist is less important than her defiance. In a country where artists are often forced to make compromises — with censors, or with religious orthodoxy — her honesty and steadfastness alone seem a virtue. Despite her controversial views, however, she has not suffered harassment or threats.

“She is very important because she is not a liar,” said Khaled Khalifa, a prominent novelist and television screenwriter. “She never regretted, she never apologized.” He added that in contemporary Syrian television and film “you can barely even show a kiss.”

Mr. Khalifa said he had tried to persuade Igraa to return to the screen, without success.

ODDLY, Igraa said she was a great admirer of Hassan Nasrallah, the leader of the Shiite militant group Hezbollah. She does not share his Islamist principles, but admires his honesty. “If he asked me to sacrifice my blood, I would,” she said.

Igraa said she would make another film if the role were right. For now, the Syrian director Omar Amiralai is making a film about her life, and she seems comfortable to play the provocateur.

Pointing to a huge movie still on her living-room wall that shows her younger self, head thrown back and eyes closed in what appears to be a moment of sensual abandon, she asked, “Guess what I’m doing in that picture?” The answer? Being stabbed to death by her husband. In the film, she played a woman who cheats on her husband and then returns to him, only to have him kill her.

Men usually think the still shows a moment of sexual climax, she said, with a bawdy smile. “Only women ever guess it right.”

A version of this article appeared in print on October 2, 2010, on page A8 of the New York edition.
Posted by Dr. Amanullah De Sondy at 10:50 No comments: