by Kevin @ Bayard Studios
An homage to the great Oscar Wilde, one of his lesser known poems penned in 1881 entitled "Helas" which translated from French is "Alas". Interpreted by the young actor, Isaac Haldeman, set to the hauntingly austere music of Kevin McLeod. This fashion film was shot in Brooklyn.

Posted by Dr. Amanullah De Sondy at 14:04 No comments: 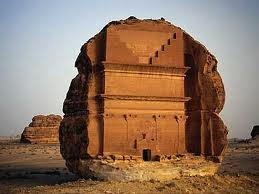 By Laura Allsop for CNN
July 29, 2010 7:31 a.m. EDT
London, England (CNN) -- A "groundbreaking" new exhibition of rare artifacts from Saudi Arabia's ancient past -- some which have never been shown abroad -- has opened in the Louvre, Paris.

The world-famous museum is hosting Roads of Arabia: Archaeology and History of the Kingdom of Saudi Arabia, a traveling exhibition showcasing 300 archeological treasures found in the Gulf country, many pre-dating the birth of Islam.

"Saudi Arabia has never been known for its history, and I don't mean recent history but the procession of civilizations that have existed in Arabia," he said.

The exhibition is the result of 40 years of excavation across Saudi Arabia, with several artifacts only unearthed in the last decade.
Gallery: Artifacts include jewlry, statues and bowls

Works include funerary stelae -- upright commemorative stone slabs -- dating as far back as 4,000 BC; huge statues of the Kings of Liyhan, an ancient kingdom in what is now Saudi.

Also on show are major discoveries from the island of Tarut; gold and pearl jewelry, including a single gold glove, found in a tomb unearthed in the ancient town of Thaj.

Some of the artifacts were only discovered in the last five years and have recently been restored.

Dr. Ali Al-Ghabban is Vice President of the Saudi Commission for Tourism and Antiquities (SCTA).

The exhibition at the Louvre literally gives you another dimension to the heritage of Saudi Arabia and its colors.

Saudi has been a major trade hub since the dawn of time, and was a connecting point between the Arabian Peninsula and the rest of the world.

Trade routes criss-crossed the country, the largest in the Arabian peninsula, followed later by pilgrim routes leading to Mecca and other holy sites.

Another section of the exhibition explores Saudi's role as the cradle of Islam, displaying artifacts such as a door from the Ka'ba in Mecca, a gift from an Ottoman sultan in the 17th century.

Focusing on the roads that took pilgrims to the country's holy sites, it suggests that Saudi Arabia was specially chosen to spread the message of Islam because of its geographical position linking major civilizations.

Today, Saudi, a member of the G-20, is participating increasingly in global politics, and Roads of Arabia gives Riyadh an opportunity to assert its cultural and historical significance, al-Saud said.

Roads of Arabia is the result of an agreement between the Louvre Museum and the SCTA in 2004. An exhibition of Islamic masterpieces from the Louvre at the National Museum in Riyadh kicked off the agreement in 2006.

"It's a breakthrough, and of course the Louvre has a reputation," al-Saud said.

As for the Louvre, a relationship with the largest country in the Middle East comes as part of a wider strategy to extend its cultural influence to the Gulf.

In 2007, France and Abu Dhabi signed an intergovernmental agreement to open the Louvre Abu Dhabi in the cultural district being built on Saadiyat Island. It is currently expected to open in 2013.

It's about ... a cultural exchange ... It's an occasion for people of the Gulf to learn much more about European and Western culture."

Roads of Arabia will be on display at the Louvre Museum until September 27, after which -- in the spirit of the roads which it celebrates -- it will embark on a tour of museums across the world. Spain is slated as the next host.
Posted by Dr. Amanullah De Sondy at 08:34 No comments:

Posted by Dr. Amanullah De Sondy at 16:32 No comments:

Jordanian police give lettuce lady a dressing down 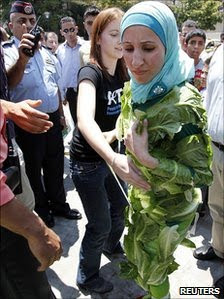 BBC Website
An animal rights protester clad in lettuce leaves drew a crowd in the Jordanian capital Amman, but also got the attention of city police. Officers led Amina Tariq, a member of People for the Ethical Treatment of Animals (Peta), to a restaurant where she could change out of her leafy garb.

The activist and a colleague were then taken to a police station and held for three hours before being released. Police said the group had failed to obtain permission for Sunday's protest.

Peta has staged similar pro-vegetarian protests in other countries - including Nigeria, the Philippines and the UK - with scantily-clad "lettuce ladies" covering their modesty with green leaves.

But in dress-sensitive Amman, Jordanian-Muslim Ms Tariq was fully clothed beneath her outer salad dressing. She carried a placard reading "Let vegetarianism grow on you".

However, police were not amused by the scene at a busy roundabout which was watched by a growing crowd and passing motorists. "She failed to obtain permission to demonstrate as required by law," one police officer told AFP news agency.

But senior Peta campaigner Ashley Fruno, who was with Ms Tariq at the police station, said she was puzzled by the police reaction.

"We contacted the Jordanian authorities a month ago and they told us we did not need permission because it is not an actual protest since there would be one person involved," she said. "I have no idea what happened today."

Peta says a vegetarian lifestyle is healthier for humans, kinder to animals and better for the environment.
Posted by Dr. Amanullah De Sondy at 21:57 No comments: