Happy Muslim Men and Women Who Confuse You

By Mona Eltahawy
Tuesday, March 24 2009
Published in Arabic in Qatar's Al Arab and in English in Metro Canada

There’s something wrong with the pictures coming out of Pakistan these days. Ever since Pakistani President Asif Ali Zardari reinstated the country’s chief justice, I’ve been trying to figure out what it was. And then it hit me. Happiness. Joy. Celebration. How often do we see pictures of happy Muslim men? What a relief too that they were Pakistani. 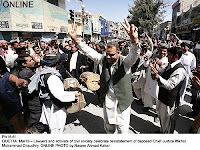 I’ve developed a theory about the Muslims we see on our television screens and front pages and who are usually from Pakistan. Angry Bearded Muslim Man is the favorite. Whenever the Muslim world is supposed to be upset or offended, invariably that story is illustrated by images of Angry Bearded Muslim man: marching (usually in Pakistan), shouting (fists raised in the air in righteous anger), and burning something (an American flag, an Israeli flag, preferably both!) His female counterpart is Covered in Black Muslim Woman. She’s seen, never heard. Visible only in her invisibility under that black chador, burqa, face veil, etc.

In those images you have conveyed all you want to say about Muslims: the men are angry, dangerous and want to hurt us; the women are just covered in black. While there are indeed some Muslim men and women who fit both such descriptions they are by no means the majority and they are utterly insufficient in describing the diversity of views, appearances and attitudes among Muslims.

And it’s quite easy to see why - they make for sexy TV and enticing front page photos. And they are my biggest competitors and nemeses when I give lectures or appear on television here in the U.S. My first U.S. TV appearance was on the Fox News Network on a show called “The O’Reilly Factor”. The host of the show, Bill O’Reilly is known for his conservative views and his confrontational style which often provokes guests with the result that O’Reilly and the guest shout at each other. It’s more entertainment than news or information.

After my appearance on “The O’Reilly Factor”, some viewers sent me email asking “Are you sure you’re a Muslim? Where’s the headgear?” Others wanted to know why I spoke English so well. Clearly, I did not fit the image of the Covered in Black Muslim Woman that many American viewers are used to. I was confusing them.

People don’t like to be confused. I discovered that during a panel discussion I took part in at a cultural centre in New York City in 2007 in which the questions “What does a Muslim look like? What does a Muslim home look like? And just who exactly makes up the Muslim mainstream?” seemed to be the ones foremost on the audience’s mind.

The panel discussion was meant to highlight the diversity of Muslim voices and experiences in the United States. My fellow speakers and I offered quite different views on a range of subjects that surely were proof of the vibrant debate among Muslims but despite our best efforts, not all were convinced apparently. Two women from the audience were later overheard saying “They’re trying to convince us they’re the mainstream? They’re not the mainstream.”

That, coupled with a question during the question and answer session on “what does a Muslim home look like” (implied was that it can’t possibly look like a home any normal person would recognise), got me wondering against whom my co-panelists and I were being compared.

I’m quite sure it’s Angry Bearded Muslim Man. And Covered in Black Muslim Woman. Which brings me back to the happy Pakistanis – men and women – in our newspapers these days. While I’m the last person to deny the danger of radicals in the Muslim world - much of my time and effort go into denouncing violence in the name of religion – I am also a proud liberal, secular Muslims.

I love to confuse people by subverting the stereotype of Muslims that they always see and hear from. I believe that breaking the false equation between conservatism and authenticity is the best way to end the monopoly over religious thought by radicals and their supporters. 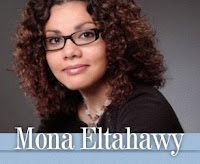 When we stop equating conservative with authentic, we recognize the diversity of Muslim views and refuse to allow one voice to speak for us all. Only then can we be recognized as human beings, in all our differences. It is by confusing people that we are allowed to be human beings, not Muslims, not Angry Bearded Muslim Man or Covered in Black Muslim Woman but human beings.

That will become possible when we see more Happy Muslim Men and Women Who Confuse You.

When will we see Islam as an Intellectual Civilisation too?

Islamic faith in no way bars people from free and critical inquiry into ethics, history and society.
By Eric Heinze - LONDON

This semester I am teaching a course about Aristotle, democracy and law on a University of London campus which has large numbers of Muslim students. Over the past few weeks, two of them approached me – independently, and at different times. They both asked, a bit nervously, whether Aristotle's philosophy is compatible with Islam. 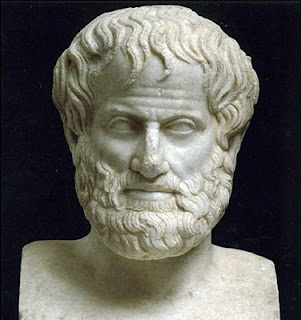 They couldn't have posed a more interesting or complicated question.

After the fall of the Roman Empire and into the Middle Ages, Greek learning gradually vanished from Western Europe. It was the Mediterranean centres of Muslim learning that kept Greek thought alive. Intellectuals such as Al-Farabi, Avicenna and Averroes authored lengthy commentaries on early Greek treatises on democracy, theology, psychology and many other subjects that are still studied today as classics.


In the later Middle Ages, it was from Arabic translations that Aristotle re-appeared in the West, re-introducing logical and dialectical rigour into medieval Christianity, and heralding the gradual revival of Greco-Roman classicism that culminated in the Italian Renaissance.

Over centuries, through empires and crusades, through the rise and fall of entire civilisations, the body of wisdom weaving steadily through Islam, Christianity and Judaism was Greek philosophy, the great example being Spain in its Golden Age.

Yet some insist that secular philosophy is anti-Islamic. And the students who approached me found themselves in the situation of many young Muslims in the West today. Even the choice to attend a class on law and ethics can provoke dilemmas of identity and allegiance.

Anyone familiar with Plato knows that nothing is taboo in Greek philosophy. Nor is any proposition admitted on faith alone. Logic and nature, ethics and politics, even art, music and literature must be justified through reason. No custom, tradition or religion stands above scrutiny. The very existence of God – or the gods – must be cast off if good reason cannot be mustered in support of it.

For those who believe that a meaningful human life requires faith coupled with reason, the ancient Greeks make unsettling reading. Religious people of all faiths have at times shunned secular philosophy. Religion, like science, closes minds when it leads people openly, or secretly, to declare, "We have all the truth we need. We don't need philosophy!"

My two students had no intention of shutting down their minds. Both decided that their Islamic faith in no way bars them from free and critical inquiry into ethics, history and society. They embrace Islam to bring a wider world in, not to shut it out. They have no fear of Aristotle. They are, like Aristotle, the arbiters of their own minds. They see in the Greek canon not crusty dogma, but living dialogue. Aristotle poses no more of a threat to them than would an interfaith educational or cultural forum.

According to a poll recently conducted for the BBC, nearly 80 percent of British Muslims, far from shunning Christianity, support a stronger role for it in British life. That figure exceeds by 10 percent even the number of Christians who express such support. How can that be? Wasn't Christianity the avowed foe of Islam for century after blood-soaked century?

What many Muslims in the West understand, and what my two students embrace, is the insight that cultural, religious or intellectual traditions are interactive and dynamic. Muslims are inviting non-Muslims to re-evaluate their own heritage, because they recognise that re-opening the mind to one tradition is a way of opening it to others.

Past intolerance need place no obstacle in the way of a tolerant future. Muslims are urging non-Muslims to celebrate an important past, which does not preclude that past, or any past, from remaining subject to ongoing, critical assessment.

In recent years, headlines and bookshops have swelled with stark, simplistic distinctions: science versus religion, reason versus faith, the West versus Islam. It is not in the triumph of any one of these, but in constant, constructive exchange among all of them that science and religion, reason and faith, the West and Islam fulfil their highest aspirations.

While many voices have ignorantly dismissed Islam – and indeed all religion – as an embodiment of ignorance, my two students are proving the contrary, as are Muslim intellectuals throughout the world. Like their great medieval forbears, they seek within Islam not closure, but openness. They are using Islam to deepen their understanding of other traditions, and using other traditions to deepen their understanding of Islam.

Eric Heinze is professor of law and humanities at Queen Mary University of London. This article was distributed by the Common Ground News Service and can be accessed at GCNews. It appeared in The Guardian's "Comment is free: belief" website.
Posted by Dr. Amanullah De Sondy at 05:21 No comments: