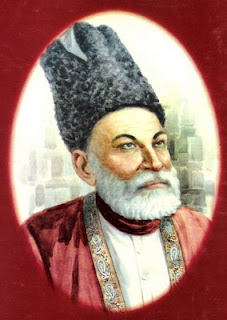 The fresh fire arises as it catches flame to flame
It alights not with its self, nor burns out in itself
Life is a sign of death
Everything is to go one day
If a droplet of God’s blessing had not separated
This world would surely not exist
Nor would this universe exist
Which person would call God and to whom would God be God?

Struck with anxiety, apathy and distress
If I were not attached to a soul given by God, I would surely be nothing
It has been a while since Ghalib has died; yet still he is remembered
His constant questioning on issues, if it wasn’t to be like this then what would there be?
Posted by Dr. Amanullah De Sondy at 08:17 No comments:

I have a strong affiliation with St. Mungo not just because I am a born and raised Glaswegian but I went to a primary school named after him. There is something quite special about St. Mungo, God rest his soul.

Mungo's mother, Princess Thenaw, also known as St. Thaney, was the daughter of the Brythonic king, Lleuddun (Latin, Leudonus), who ruled in the Haddington region of what is now Scotland, probably the Kingdom of Gododdin in the Old North. She became pregnant, after being seduced by Owain mab Urien according to the British Library manuscript. Her furious father had her thrown from the heights of Traprain Law. Surviving, she was then abandoned in a coracle in which she drifted across the River Forth to Culross in Fife. There Mungo was born.

Mungo was brought up by Saint Serf who was ministering to the Picts in that area. It was Serf who gave him his popular pet-name. At the age of twenty-five, Mungo began his missionary labours on the Clyde, on the site of modern Glasgow. Christianity had been introduced to the region by Saint Ninian and his followers welcomed the saint and procured his consecration by an Irish bishop. He built his church at the confluence of the Clyde and the Molendinar Burn, where the present medieval cathedral now stands. For some thirteen years, he laboured in the district, living a most austere life in a small cell and making many converts by his holy example and his preaching.

A strong anti-Christian movement in Strathclyde, headed by a certain King Morken, compelled Mungo to leave the district, and he retired to Wales, via Cumbria, staying for a time with Saint David at St David's, and afterwards moving on to Gwynedd where he founded a cathedral at Llanelwy (now St Asaph). While there, he undertook a pilgrimage to Rome. However, the new King of Strathclyde, Riderch Hael, invited Mungo to return to his kingdom. He decided to go and appointed Saint Asaph as Bishop of Llanelwy in his place.

For some years, Mungo fixed his Episcopal seat at Hoddom in Dumfriesshire, evangelising thence the district of Galloway. He eventually returned to Glasgow where a large community grew up around him, becoming known as Clas-gu (meaning the 'dear family'). It was nearby, in Kilmacolm, that he was visited by Saint Columba, who was at that time labouring in Strathtay. The two saints embraced, held long converse, and exchanged their pastoral staves. In old age, Mungo became very feeble and his chin had to be set in place with a bandage. He is said to have died in his bath, on Sunday 13 January.

In the 'Life of Saint Mungo', he performed four religious miracles in Glasgow. The following verse is used to remember Mungo's four miracles:

The verses refer to the following:

* The Bird — Mungo restored life to the pet robin of Saint Serf, which had been killed by some of his fellow classmates, hoping to blame him for its death.
* The Tree — Mungo had been left in charge of a fire in Saint Serf's monastery. He fell asleep and the fire went out. Taking branches from a tree, he restarted the fire.
* The Bell — the bell is thought to have been brought by Mungo from Rome. It was said to have been used in services and to mourn the deceased. The original bell no longer exists, and a replacement, created in the 1640s, is now on display in Glasgow.
* The Fish — refers to the story about Queen Languoreth of Strathclyde who was suspected of infidelity by her husband. King Riderch demanded to see her ring, which he claimed she had given to her lover. In reality the King had thrown it into the River Clyde. Faced with execution she appealed for help to Mungo, who ordered a messenger to catch a fish in the river. On opening the fish, the ring was miraculously found inside, which allowed the Queen to clear her name. (This story may be confused with an almost identical one concerning King Maelgwn of Gwynedd and Saint Asaph.)


On the spot where Mungo was buried now stands the cathedral dedicated in his honour. His shrine was a great centre of Christian pilgrimage until the Scottish Reformation. His remains are said to still rest in the crypt. 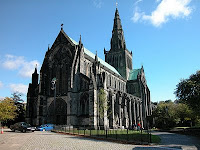