A trial version of the first virtual world aimed at the Muslim community has been launched. Called Muxlim Pal, it allows Muslims to look after a cartoon avatar that inhabits the virtual world. Based loosely on other virtual worlds such as The Sims, Muxlim Pal lets members customise the look of their avatar and its private room. Aimed at Muslims in Western nations, Muxlim Pal's creators hope it will also foster understanding among non-Muslims.

"We are not a religious site, we are a site that is focused on the lifestyle," said Mohamed El-Fatatry, founder of Muxlim.com - the parent site of Muxlim Pal. "This is for anyone who is remotely interested in the Muslim culture and the Muslim lifestyle," he said. "From what we have seen from our market research is that most Muslims have a lifestyle that is not so different from everybody else," he said. "They all share the core values which are from Islam then beyond that they actually have made identities, they have many interests."

Mr El-Fatatry said Muxlim.com had 26 different categories of content, only one of which was religion. He said he hoped it would help Muslims meet and talk to others that shared their interests. Those joining the site will get to control the life of a cartoonish avatar or pal that they can then use as a proxy to explore the Muxlim Pal virtual world - which has a beach bar, arena and shopping areas.


The pal or avatar that members control has several "meters" governing its happiness, fitness, knowledge and spirituality that change when the character carries out tasks in the social world. "How it differs from The Sims is that it is social," said Mr El-Fatatry. "So you can actually be with other people at the same time, interact, and see what their characters are doing."

The browser-based virtual world can be used for free but alongside will go some premium services that will help users do more with their avatar and personal room. Those joining Muxlim Pal get a few virtual coins to spend in the online world's shops - to clothe their avatar or decorate their room. Real cash can be used to buy more virtual coins. So far no exchange rates have been given for swapping real for virtual coins. 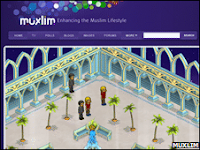 Mr El-Fatatry said the impetus to create Muxlim Pal grew out of observing what Muxlim.com's 1.5m monthly users spent most time on. He said: "We were seeing that our users were enjoying certain character developing elements of Muxlim.com, and as no other virtual world offers a family-friendly environment for our community, we felt there was a need to cater for the people who were being left out." Mr El-Fatatry said because the trial version was only six months old it was likely to change significantly before the public launch in 2009. Muxlim was investigating whether members want to be able to create their own content, such as chairs or clothes, and be able to share those with other users. "This is nowhere near the vision of where it will be someday," he said. "It is very important to put things out and listen to how people interact with it. What feedback they give us and then that will play a big role in which direction we take the product in."
Posted by Dr. Amanullah De Sondy at 06:07 No comments:

Muslims throughout the world are celebrating Eid today which marks the end of the annual pilgrimage to Mecca, Saudi Arabia where around 2.5 million Muslims have gathered to pray to God. There are many rituals associated with the Hajj pilgrimage. Muslims all wear the same white clothes to show equality amongst them. They also walk together around the Ka’ba, the black stone structure in the centre of the Mosque. Time is also spent at the mountain where the Prophet Muhammad preached his final sermon and stones are thrown by the pilgrims at a structure which signifies the devil.

However, the pilgrimage also includes a ritual that speaks to me about patience, sacrifice and the family. Every Muslim man and women run between two hills following in the footsteps of the pious Hagar. As her child Ishmael lay crying with thirst she began running in a frenzy to find water only to find it emerging from the ground where he was banging his feet. Even though the prophet Abraham had assured her of God’s protection she still felt, as a Mother, the need to run between these two hills. It has made me think about the way in which the family was the focus of God’s message of sacrifice and raises an important question about our relationship with our own family. 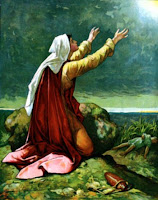 Sacrifice is not an easy task but it needn’t be impossible. We may not be faced with the same situation as Hagar today but we all have family members who require our sacrifice and patience. I for one will be spending my day with my parents and family but my moment of patience and sacrifice comes in the form of my thirteen nieces and nephews who will be running riot at home!

Special days of celebration are frequent in nearly all world faiths and most commonly involve the family. But what we must all consider is the meaning behind our moments of celebration and what we can learn from them to better ourselves, families and the society we live in.
Posted by Dr. Amanullah De Sondy at 01:21 3 comments:

Wikipedia:
Umm Kulthum (Arabic: أم كلثوم‎, born أم كلثوم إبراهيم البلتاجي Umm Kulthum Ebrahim Elbeltagi; see Kunya; Egyptian Arabic: Om Kalsoum). (May 4, 1904 – February 3, 1975). Various spellings include Om Kalthoum, Oum Kalsoum, and Umm Kolthoum. In Turkish, she is named Ümmü Gülsüm. She was an Egyptian singer, songwriter, and actress. Born in El Senbellawein, she is known as "the Star of the East" (kawkab el-sharq). More than three decades after her death, she is still recognized as the Arab world's most famous and distinguished singer of the 20th century. Kulthum had a contralto singing range.

Posted by Dr. Amanullah De Sondy at 05:11 No comments: